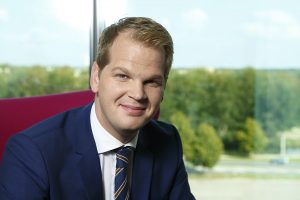 Welcome to the largest business park in Almere! De Vaart offers a wide range of activity: from small start-ups in the Mac3park, its entrepreneurial breeding ground, to many internationally operating companies. You will see many a business of sound reputation in this special edition of De Wegwijzer. This first edition is devoted entirely to one of Almere’s business parks. It beautifully complements the Wegwijzers for Haven, Buiten, and Poort: as industriousness is woven into the fabric of this city’s identity. After all, we have plenty of space in Almere.

Spatially, De Vaart fits well with the Buiten borough it neighbours on: a beautiful, polder-like borough. Plenty of space, in other words, combined with attention for green structures in between and along the Business Park. And the good news is that we still have many plots to allocate, both to new companies in Almere and companies that are ready to upsize. It is good to know that the Business Circle of Almere is also active in De Vaart so that jointly, we can keep the business park safe and up to date.

To me, the greenhouse area in De Buitenvaart is rather special. It started out as overflow for horticulturalists who had to make way for the Olympic village that was planned in Amsterdam. Like many other horticultural areas, De Buitenvaart has weathered economic storms. Still, many business owners managed to keep their head above water with a mix of cultivation and storage facilities. The flowers they cultivate are sold the world over, and they supply the local market with vegetables. Our city council has designated De Buitenvaart as a green and sustainable greenhouse area, where we like to focus as much as possible on the correlation between greenhouses and contemporary challenges. One example is the 2022 Floriade and the road towards it, GrowingGreenCities. Although the link with Floriade is obvious for ornamental plants, local food, whether organic or not, can also be an excellent showcase.

In addition, De Buitenvaart borders directly on the access to the Oostvaardersplassen lake area, which has become known as a unique part of the Netherlands with its wild horses and variety of bird species. With increasing visitor numbers, we are faced with a fine challenge to determine which economic and other facilities should be made available in the years to come.

We hope you enjoy this special Wegwijzer,

The power of Almere

Almere is a young, green sustainable, lively and surprising city, where experimenting and spaciousness are highly valued. In a mere 40 years, Almere has become the eighth largest city in the Netherlands, boasting 200,000 inhabitants. In that short time, Almere has showcased its considerable potential and vitality. In addition, Almere is an innovative and enterprising city with more than 16,700 businesses and (healthcare) institutions.

Almere has a talented and well-educated labour force as well as excellent infrastructure, accessibility and beautiful unique nature reserves and recreation areas such as the Oostvaardersplassen lake area.

With so much going on in Almere, inhabitants and visitors need never be bored. Visit one of Almere’s shopping malls, go to the cinema or visit nature experience centre Almere-Buiten.

With the construction of approximately 60,000 new homes, Almere is expected to become the fifth city in the Netherlands by 2030. Another key development is the 2022 Floriade which will take place on the outskirts of the city, near the Weerwater city lake.

In the coming years, the city will also focus on continuing to provide room for economic development, all on the basis of its own strength and a consciousness of its own position in the region. The northern wing of the Randstad, known as the Metropool Regio Amsterdam (MRA), of which Almere is a part, continues to be of great importance to the Netherlands. That is why Almere works on strengthening the MRA, in cooperation with Amsterdam and regional partners.

As the Netherlands’ youngest city, Almere offers business employees the unique combination of the advantages of a large city and a high quality of life surrounded by woodlands, beaches and lakes.

De Vaart is Almere’s largest business park, both in terms of size and number of jobs. De Vaart has around 370 businesses and roughly 5,000 employees. De Vaart houses a wide variety of national and international companies and while itis suitable for industry, it mainly offers employment to wholesale and commission trade. The entire De Vaart area consists of four parts:

De Vaart 1 is located on a harbour basin along the Lage Vaart channel. A wastewater treatment and environmental platform are located here, among others. Large businesses at De Vaart 1 include Mitsubishi Turbocharger, Van Alfen, and Yanmar.

De Vaart 2 is an area with relatively many collective business locations such as the Macpark, a breeding ground for entrepreneurs. It also has large businesses: CTH and Telrol.

De Vaart 4 is a large-scale business park that houses De Vijfhoek, a recycling company, and Groengas, a biodigester that converts manure and other agricultural products into biogas. The Correctional Facilities of Almere are also located here. De Vaart 4 is a location where companies of the heaviest environmental category (heavy industry) can take up residence.

The Groene Kadeweg business park is located in the middle of De Vaart, and intended for large-scale space-extensive recreational facilities.

The Keurmerk Veilig Ondernemen Bedrijventerreinen (KVO-B, Certificate of Safe Entrepreneurship for Business Parks) applies throughout De Vaart. This means that the municipality, police, fire brigade and association of entrepreneurs regularly inspect the safety and attractiveness of the site. The Stichting Beveiliging Bedrijventerreinen Almere (SBBA, Security Foundation for Business Parks in Almere) is active in De Vaart. There is also a fiberglass network.

If you would like more information on De Vaart, please visit:  www.ikonderneeminalmere.nl and fill out the contact form online or via telephone number: 14036

De Vaart has an active Business Association: the VBA (Business Circle Almere). Through its variety of contact points, the VBA is able to look after the specific interests of each separate business park. To this end, specific means of communication are created, such as email accounts and business cards. These ‘local’ VBA circles have direct access to the ‘central’ VBA board through their own representatives, so that the lines between the practical entrepreneurship and the board are as short as possible. These representatives for each business circle don’t govern from a distance, in other words, but are active and involved entrepreneurs who work in the field themselves. They are committed to issues related to their business operations or immediate environment.

Thanks to this interconnectedness with entrepreneurs in different business parks and elsewhere in the city, these well-organised entrepreneurs strengthen and encourage each other and are able to make optimal use of the strong network that they have forged together. Thanks to the structure of different VBA Business circles that work together in the central association of entrepreneurs, the VBA is a force to be reckoned with as a sparring and cooperation partner. In this way, the entrepreneurs can influence the city’s development through their own VBA circle.

The VBA promotes the interests of entrepreneurs that are located in Almere and the surrounding area. It keeps a critical eye on the setup and implementation of the municipality program of Almere. Thanks to its knowledge and degree of organisation, the VBA is an authoritative sparring partner for governmental institutions and agencies, for many issues. A few examples:

More info about the VBA via the secretariat: 036-5338393/info@vba-almere.nl or through relationship manager Hank Ydema: 06-14998429/relatiemanager@vba-almere.nl